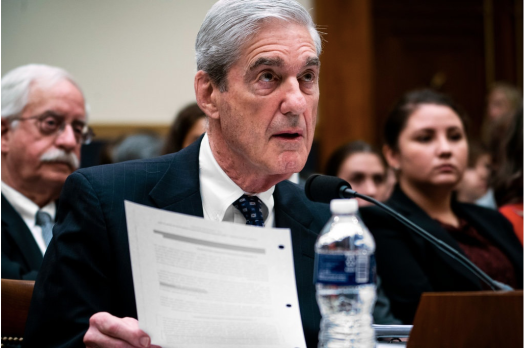 There was no way that Robert Mueller was going to move the needle today on the issue of impeachment. If you went into the Mueller hearings–before the House Judiciary Committee and the House Intelligence Committee immediately thereafter–favoring the impeachment and conviction of the worst president we have ever had and the worst person to ever have become president, then nothing Republicans said or did in terms of trying to slime Mueller, his team, or the entire investigatory process was going to change your mind. (Nor should it have changed your mind, of course). Similarly, if you went into the hearings as a Trump cultist–“partisan” seems too light a word to describe the Trumpenvolk–no amount of facts uttered by Mueller or written in black and white in the Mueller report were going to change your thing-resembling-a-mind. Both sides are completely and entirely dug into their positions, and will continue to be dug into their positions for the foreseeable future.

In the meantime, the best that can be hoped for is that Democrats will continue to use their majority in the House to keep the Trump administration–and the Trumpenvolk cultists who now dominate the Republican party–on the defensive, so as to garner whatever electoral advantage they can garner by portraying the president and his enablers as the crooks that they are, and by portraying the Trumpenvolk who make up the corps of Republican elected officials as the unpatriotic, disloyal cultists they are. Democrats will have to continue to press for documents, and for fact witnesses. To the extent that these entirely justified demands are resisted by an obstructionist White House, and to the extent that Democrats are hampered in getting the documents and fact witnesses they need by counterclaims on the part of the president and his allies that these Democratic demands serve “no legislative purpose,” Democrats should immediately begin an impeachment inquiry to satisfy the “legislative purpose” requirement (not to mention because Donald Trump deserves to be impeached and convicted).

Some stylistic points–because it is 2019 and style so often unfairly shares the same stage with substance:

1. Yes, Mueller is older. Yes, at times, he seemed as though he was not at the top of his game. Of course, part of the reason his answers may have been halting was because of the Justice Department’s demand on the eve of the hearings that Mueller not go outside the bounds of his report–a demand that Mueller respected, even though he did not have to, given that he is no longer an employee of the Justice Department. Respecting the demand may well have made Mueller reluctant to offer full and expansive answers. That having been said, even if Mueller has lost some of his mental fastball, the proper response in any sane and decent society is “who f***ing cares? The report is the report, it says what it says, and the facts surrounding the corruption and lack of patriotism on the part of Donald Trump and his associates would be–and are–the same, regardless of Mueller’s mental performance.”

Of course, we do not live in a sane and decent society, because–as mentioned above–it is 2019 and style so often unfairly shares the same stage with substance. As such, we are enduring a slew of stories regarding the stylistic issues surrounding Mueller’s appearance. That a number of jibes concerning Mueller’s supposed lack of a mental fastball come from the supporters of the dumbest, most dimwitted, most painfully idiotic president in American history proves to just about anyone and everyone with a functioning brain (and therefore, not named “Trump) that irony is dead.

2. This has been said by zillions of people, but I will say it as well: Few–if any–people in Congress know how to ask questions that actually generate meaningful answers. Members of Congress have their questions written out by staff, and as soon as the questioning of the typical member of Congress goes even slightly off the rails as a consequence of an unexpected answer or set of answers from a witness, the member in question is totally and entirely lost, and has demonstrates that s/he has no clue whatsoever how to adapt. In particular, the overwhelming number of members have yet to learn that in hearings such as the ones held today, one does not ask questions whose answers one does not already know. Relatedly, when it became abundantly clear that Robert Mueller would not discuss internal Justice Department discussions, would not read from his own report, and would not entertain hypothetical questions from members of Congress, Democrats should have taken the hint and should have just asked questions that entailed quoting from the language of the Mueller report, with Mueller then being asked to confirm that the language did indeed appear in the report. It is utterly mystifying that Democrats seemed to think that if they just remained stubborn, Mueller would somehow change his style of answering questions in order to make Democrats happy.

3. The above having been written, House Judiciary Committee Committee Democrats were quite clever to have ended all of their questions with the pronouncement that “no one is above the law.” A winning electoral message could be crafted out of those six words alone.

4. Republican questions can only be understood by the use of the secret Fox News decoder ring, but Republicans don’t care about the fact that only the people in their echo chamber can understand all of the QAnonisms found in Republican questions and statements. Again, no one was going to move off their pro or anti-impeachment positions, and all Republicans were interested in doing was further solidifying their base against the prospect of impeachment.

Several episodes stand out, all of which Democrats highlighted in their questions to Mr. Mueller at the morning hearing before the House Judiciary Committee.

First, there was President Trump’s June 2017 direction to the White House counsel, Don McGahn, to fire the special counsel in the wake of news reports that he was investigating the president for obstruction of justice — and Mr. Trump’s later insistence that Mr. McGahn create a false internal memorandum that would contradict reporting about this order.

Then there was President Trump’s instructions, in summer 2017, to his former campaign manager Corey Lewandowski, who was then a private citizen, to direct Attorney General Jeff Sessions to limit Mr. Mueller’s investigation with the intent to, as stated in the report, “prevent further investigative scrutiny of the president and his campaign’s conduct.”

Democrats also noted Mr. Trump’s repeated instructions that Mr. Sessions “unrecuse” himself from running the investigation, which Mr. Mueller said in the report lead to a “reasonable inference” that the president wanted his attorney general to act as a shield from the investigation.

And finally, Mr. Mueller described how Mr. Trump sought, in part through his private attorneys, to influence the cooperation and testimony of several possible witnesses, including his former campaign chairman Paul Manafort and his former lawyer Michael Cohen, by making public and private threats, and by floating the possibility of pardons.

These facts, starkly affirmed on Wednesday by Mr. Mueller after months of mischaracterization of his report by the president and others, are catastrophic.

All of this is entirely true, no matter what one might think of the nature of Mueller’s appearance before the two committees. And so is this:

President Trump has threatened to dismantle the proposition that no person is above the law. But given what we have all now heard from Mr. Mueller, it is clear that Congress must assert itself as a constitutional protector of the rule of law.

In opening an impeachment inquiry, Congress must confront other questions that Mr. Mueller was not asked to answer — the most important of which is whether President Trump has engaged in other constitutionally repugnant abuses of power. In addition to obstruction of justice, there are at least two more, independent bases for impeachment that Congress should assess.

The American people deserve a process that will facilitate a thorough assessment of the evidence presented and the gravity of the president’s misconduct. Far from being a distraction from Congress’s other responsibilities, checking abuses of executive powers is one of its core functions.

Mr. Trump has spent his entire presidency trying to foreclose the possibility of accountability for his misdeeds. Mr. Mueller, in his testimony on Wednesday, made clear that such a path is unacceptable. Congress must take it from here.

I’ll just add one more observation: Some may have hoped that Mueller would land a death blow against this degenerate and absurd presidency with his appearances before the Judiciary and Intelligence committees. Some may still hope that the House of Representatives will do what it needs to do, and begin an impeachment inquiry in order to demonstrate the “legislative purpose” that will help relevant committees get the documents and fact witnesses that they need. Some may still hope that the full House of Representatives will do what they would do in any sane and decent world, and impeach the president of the United States, regardless of what Mitch McConnell and a Republican Senate will do in response. But while it is well, proper and justified for us to expect and demand that our public officials do the right thing, at the end of the day, in a democracy such as ours, the power to remedy the current, awful situation, ultimately lies in our own hands, and we can exercise that power when we go and vote.

I hope that our public officials turn out to be heroes. But we have the power to be the heroes our country needs and deserves at this dangerous and appalling moment in American history. Let us use that power when the time comes for us to use it. Donald Trump and his minions show America at its worst. We can show the true face of America–America at its best–by voting Donald Trump and his enablers into political oblivion.

More than once–throughout his report, and during the course of his testimony before the Judiciary and Intelligence committees–Robert Mueller stated that because of the Office of Legal Counsel’s memo on the subject, Donald Trump, the sitting president of the United States, could not be indicted. But as Mueller also said today, a former president can be indicted.

And wouldn’t that be a lovely sight to see? The sooner Donald Trump becomes a former president, the sooner all of us can see that lovely sight. All that is required for that to happen is for us to be the heroes our country needs and deserves.

Be those heroes. That is the ultimate takeaway message from the Mueller hearings.