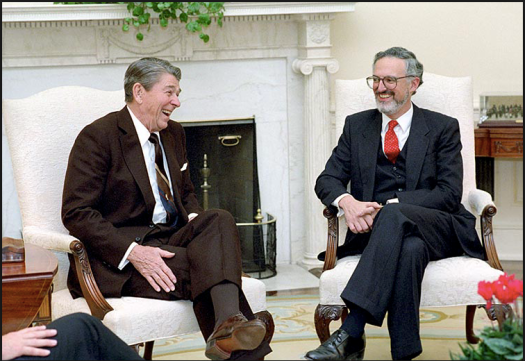 So, at the end of the 1986-1987 Supreme Court term, Associate Justice Lewis Powell decided to retire from the Court. Accordingly, Justice Powell submitted his resignation letter to President Reagan. The president nominated Judge Robert Bork to replace Powell. Bork got voted down 58-42 by the United States Senate, the first Senate rejection of a Supreme Court nominee since Judge Harold Carswell’s nomination by President Nixon went down in flames. Afterwards, President Reagan nominated Anthony Kennedy, the Senate confirmed him, and the rest is history, right?

Wrong! Actually, after the Bork nomination was shot down and before Kennedy got nominated, President Reagan nominated Judge Douglas H. Ginsburg of the DC Circuit Court of Appeals–one of Bork’s colleagues on the court–to take Powell’s place. Judge Ginsburg had and has a very good academic record (Cornell for undergrad, University of Chicago for law school; folks like me will forgive him for having attended the Latin School instead of the University of Chicago Laboratory Schools when he was a high school student in Chicago), he clerked for Judge Carl McGowan on the DC Circuit, and then for Justice Thurgood Marshall, he was a professor at Harvard Law School, served in the Reagan Administration in the Office of Management and Budget, and then in the antitrust division of the Justice Department, and then got nominated to the DC Circuit in 1986–the Senate confirmed him approximately two weeks after his nomination. And yet, Ginsburg’s Supreme Court nomination crashed and burned even harder than did Bork’s.

Want to know why? Because National Public Radio’s Nina Totenberg reported that Ginsburg used marijuana on “a few occasions” as both a student and as a professor at Harvard.

That was it. That was all. That was everything. Ginsburg was hardly a hard-core toker. Quite the contrary. He experimented with pot a handful of times, got called out on it in public after his Supreme Court nomination, and as a result, no one is calling him “The Notorious DHG” nowadays. A little over a week after having been tapped for Justice Powell’s seat by President Reagan, Ginsburg withdrew his nomination. The date of his withdrawal was November 7, 1987. Approximately five years later, Bill Clinton got elected president of the United States, and not because people actually believed that Bill Clinton really did refrain from inhaling.

Five seconds after you finish reading this Facebook post and then hear about the latest absolutely-devastating-in-any-other-era Trump scandal–whatever that scandal turns out to be–do please be kind enough to spare a thought for Douglas Ginsburg, and for a time when we were willing to hold people to account for what we considered “bad behavior,” even though in the case of the Almost-Notorious DHG, we overreacted wildly and foolishly.