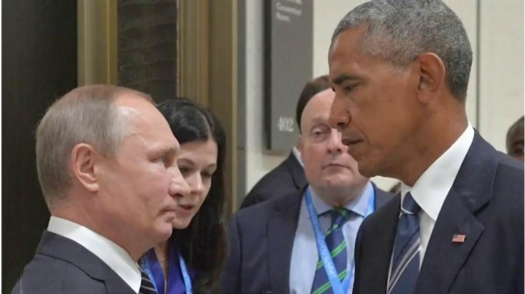 I urge everyone to read this horrifying account of how the Obama administration learned of Russian active measures that were designed to disrupt the 2016 presidential election and to throw the election to Donald Trump, whom the Russians have long seen as far friendlier to their interests and designs. I won’t excerpt anything from the story; just read it all, and be prepared to be deeply angry. A combination of fear, excessive confidence in Hillary Clinton’s electoral appeal and an inability to confront Republicans at the state and national level who are equally complicit in having ensured that Russian interference in American elections would go unpunished caused the Obama administration to have taken no measures whatsoever to strike back against Russia and the Putin regime for its interference. The comment in the story that Team Obama “choked” is entirely accurate. The American electoral system was the target of deeply malevolent interference and chicanery, and nothing whatsoever has been done to retaliate against the perpetrators of that chicanery. There is no other way to put matters: We have been made look like fools.

You’d think we would have learned something from all of this. You’d think that the Trump administration might be taking all measures necessary to secure our electoral system against future interference, especially given the many warnings delivered by our intelligence agencies stating that future interference is inevitable.

The Trump administration has taken little meaningful action to prevent Russian hacking, leaking and disruption in the next national election in 2018, despite warnings from intelligence officials that it will happen again, officials and experts told NBC News.

“This attack is really the political equivalent of 9/11 — it is deadly, deadly serious,” said Michael Vickers, a career intelligence official who was the Pentagon’s top intelligence official in the Obama administration. “The Russians will definitely be back, given the success they had…I don’t see much evidence of a response.”

According to recent Congressional testimony, Trump has shown no interest in the question of how to prevent future election interference by Russia or another foreign power. Former FBI Director James Comey told senators that Trump never asked him about how to stop a future Russian election cyber attack, and Attorney General Jeff Sessions, who sits on the National Security Council, testified that he has not received a classified briefing on Russian election interference.

I remember when Republicans used to be tough on Russia. Back in 2012–which was not so long ago, really–the Republican presidential nominee told us (quite accurately) that Russia is “without question our number one geopolitical foe, they fight for every cause for the world’s worst actors.” At the time that Mitt Romney said those words, Barack Obama and other Democrats mocked him mercilessly, as did many in the news business.

But at least Obama and the Democrats learned something since then, even if they have not acted on their knowledge as zealously as they ought to have. The inaction Team Obama displayed until exceedingly late in the game is, of course, inexcusable. But right now, the Kremlin has a useful idiot in the Oval Office, and the Republican party has had a post-Romney personality transplant that is frightening and appalling to behold. Team Obama looks positively Reaganesque by comparison.

The national and political security of the United States is being compromised, and the party in charge of the White House and both chambers of Congress does not seem to care one whit. I cannot imagine a more appalling display of a lack of patriotism, and I cannot imagine a more favorable and joyous outcome for the Kremlin. People should be in the streets screaming in fury about this betrayal of the country. The president of the United States should be steeling the country to fight back against this effort to undermine the very foundations of American republican democracy. Instead, all we are doing is sucking our thumbs while the Putin regime prepares further active measures.

If you think that assaults against the American electoral system cannot get any worse, be prepared to be sorely disappointed. The inaction of our leadership class all but guarantees that worse is yet to come.