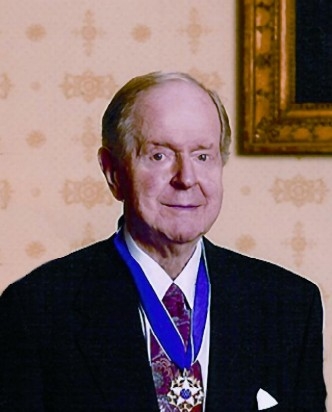 Alas, we did need Robert Conquest to do all of these things, and fortunately for civilization, and for those who wish to keep it civilized, Robert Conquest did devote much of his life demonstrating that communism was the way to barbarism and that the Soviet Union placed on horrifying display some of the most despicable barbarism ever to have visited humankind. Of course, there exist the defiantly non-civilized, who seem to bemoan the fall of the Soviet Union, despite the evidence that the fall of the Soviet Union was a very good thing (thus incurring the justified disgust of non-monsters among us). Such people will never join the ranks of the enlightened; our only consolation may be that they are not too numerous, and as long as we are able to deny them and their likes any real and consequential political power, we should be all right (he blogged, hopefully).

In any event, I blog this blog post because the great Robert Conquest is no longer among us. He is remembered, however, though to be sure, no remembrance could possibly do him justice:

Mr. Conquest, a poet and science-fiction buff, turned to the study of the Soviet Union in the mid-1950s out of dissatisfaction with the quality of analysis he saw at the British Foreign Office, where he worked after World War II in the Information Research Department, a semi-secret office responsible for combating Soviet propaganda.

Eight years later, during the Prague Spring, he published “The Great Terror: Stalin’s Purge of the Thirties,” a chronicle of Stalin’s merciless campaign against political opponents, intellectuals, military officers — anyone who could be branded an “enemy of the people.”

For the first time, facts and incidents scattered in myriad sources were gathered in a gripping narrative. Its impact would not be matched until the publication of Aleksandr Solzhenitsyn’s “The Gulag Archipelago” in 1973.

The scope of Stalin’s purges was laid out: seven million people arrested in the peak years, 1937 and 1938; one million executed; two million dead in the concentration camps. Mr. Conquest estimated the death toll for the Stalin era at no less than 20 million.

“His historical intuition was astonishing,” said Norman M. Naimark, a professor of Eastern European history at Stanford University. “He saw things clearly without having access to archives or internal information from the Soviet government. We had a whole industry of Soviet historians who were exposed to a lot of the same material but did not come up with the same conclusions. This was groundbreaking, pioneering work.”

Reaction to the book split along ideological lines, with leftist historians objecting to Mr. Conquest’s thesis that Stalin’s regime was a natural evolution of Leninism rather than an aberration.

Mr. Conquest summed up his attitude in a short poem:

There was a great Marxist called Lenin

Who did two or three million men in.

That’s a lot to have done in,

But where he did one in

That grand Marxist Stalin did ten in.

Notwithstanding their enormous scale, the mass murders of Soviet communism were eventually surpassed (in numbers of total victims), by those of communist China. Pol Pot’s Maoist regime in Cambodia probably killed a larger proportion of its population in a shorter period of time. But the Soviet system documented by Conquest was the first of its kind, and the model for all later communist mass murders, most of which arose from policies deliberately based on those of Lenin and Stalin in the USSR.

Despite Conquest’s path-breaking work, communist crimes still often fail to get the attention they deserve in the Western world. In Russia the regime of former KGB Colonel Vladimir Putin has sought to whitewash the communist past, even justifying such episodes as the 1939 Nazi-Soviet Pact.

As a former communist himself and later a self-described adherent of the moderate left, Conquest understood very well the impulses that lead many Western intellectuals and Russian nationalists to ignore or minimize the horrors of communism. He did as much as anyone to combat those tendencies, and explain why they are so dangerous.

If you were brought up in a communist home, Robert Conquest’s books really were a revelation.

In my case, two of my grandparents were members of the Party (as it was invariably called without ever needing to say which party). My father’s father joined not that long after 1917’s October Revolution in Russia and stayed faithful (it’s the right word) through the invasions of Hungary and Czechoslovakia, unshaken by every revelation and counter-revolution.

At my grandfather’s dinner table in Bedlinog, south Wales, debate was intense but futile. It was like arguing with the most devout of religious believers. Whatever came down as the line in Soviet Weekly or the Morning Star stood as gospel.

He had the collected works of Stalin on his shelf (not obviously worn with reading). When my grandmother opined at the dinner table that there must be at least some crime in the Soviet Union, her husband told her to “stop her bloody lies”.

So for those of us who did have doubts, Robert Conquest’s The Great Terror: Stalin’s Purge of the Thirties was an extraordinary work.

It was a book which changed minds and dispelled doubt (mine included) when it was published in 1968, the year of the Soviet invasion of Czechoslovakia in response to the liberalisation of the Prague Spring.

It laid out facts without adornment so they could speak for themselves, spelling out in clear language the detail of the purges and the executions. Fellow travellers of the Soviet Union sneered – and perhaps still sneer – but they couldn’t find factual errors because Conquest’s research was so meticulous.

When Soviet archives were finally opened up, Conquest’s descriptions remained unimpaired. There could be debate about numbers – the precise number of millions of Stalin’s victims – but not about the bulk of the facts presented.

Even into the 1960s, it had seemed to many like there was a battle of equal ideas. But then came Robert Conquest’s descriptions of Soviet reality.

We were told clearly how hundreds of thousands of people were shot by the Soviet secret police in a matter of months in 1937 and 1938. We learned how the purges of officers by a paranoid Stalin were so fierce that the fighting ability of the Red Army was jeopardised.

Conquest described how on a single day, 12 December 1937, Stalin and his henchman, Molotov, personally approved death sentences on 3,167 people – and then went to the cinema.

The detail was unanswerable.

There were and are a lot of people who are bound and determined to do anything and everything possible to diminish, paper over, sweep under the rug and completely ignore the crimes and horrors committed in the name of Marxism and communism. And they would have the rest of us join in and do our part in diminishing, papering over, sweeping under the rug and completely ignoring those crimes as well. And there are as well, those who are all too willing to admit that those crimes occurred, but that we perhaps ought to endure their repetition in order to achieve the better world that Marxism and communism repeatedly promise us, but never deliver; recall, for example, the morally appalling Eric Hobsbawm, who . . . well . . . read:

Not long ago, on a popular television show, Hobsbawm explained that the fact of Soviet mass-murdering made no difference to his Communist commitment. In astonishment, his interviewer asked, “What that comes down to is saying that had the radiant tomorrow actually been created, the loss of fifteen, twenty million people might have been justified?” Without hesitation Hobsbawm replied, “Yes.” His autobiography, Interesting Times: A Twentieth-Century Life, (1) conveys the same point, only rather more deviously. On the very last page, it is true, he is “prepared to concede, with regret, that Lenin’s Comintern was not such a good idea” though for no very obvious reason (except as a cheap shot) he concludes the sentence by cramming in the comment that Herzl’s Zionism was also not a good idea. Note that slippery use of “Comintern” as a substitute for Communism itself. The concession, such as it is, is anyhow vitiated by an earlier passage when he attacks America and its allies, bizarrely spelled out as India, Israel, and Italy, and referred to as rich and the heirs of fascism. In this passage he predicts, “The world may regret that, faced with Rosa Luxemburg’s alternative of socialism and barbarism, it decided against socialism” (Which leaves Americans as barbarians.) By my count, these are the only two expressions of regret in this long book. In contrast, the October revolution remains “the central point of reference in the political universe” and “the dream of the October revolution” is still vivid inside him. He cannot bring himself to refer to Leningrad as St. Petersburg. Learning nothing, he has forgotten nothing.

Robert Conquest was civilization’s antidote to the likes of Eric Hobsbawm–and to Hobsbawm’s even less intelligent and less moral adulators and imitators. The world is poorer for Conquest’s passing. All we can try to do, is to emulate his good example and to keep civilization civilized in the best sense of the word.

Requiescat in pace. The memory of the righteous is a blessing.