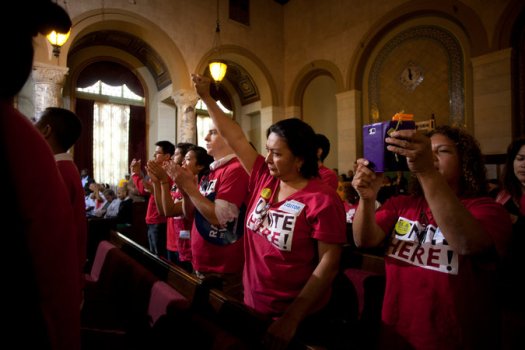 So, Los Angeles has decided to increase its minimum wage to $15 per hour. I’m sure that there are a host of people rejoicing over this alleged act of economic justice, but remember that actions have consequences:

BERGMAN: Caroline Styne owns more than half a dozen high-end LA eateries. She says of every dollar that comes in, 95 cents goes out. There’s food, rent and paying waiters, sous chefs, dishwashers – the hundreds of people it takes to keep her restaurants running smoothly.

STYNE: Labor can account for up to 40 or more percent of the overall expenses of a restaurant. Our expenses overall are so high that when you see the net profit at the end of the year you say why on earth are you in this business?

BERGMAN: Styne says she does it because she loves the people and the food, but that love can only go so far. She says a $15 minimum wage may make it impossible to keep going. Styne says she will have to raise menu prices 40 percent, which she’s afraid will turn away many customers.

BERGMAN: Despite the higher cost of labor, Styne and many restaurant owners say they would’ve been OK with a higher minimum wage had the city allowed tips to count towards the wage. But California is one of the few states where tipped workers can’t make less than minimum wage, and the city feared a so-called total compensation model would be illegal. Jot Condi, president of the California Restaurant Association, says his lawyers disagree.

BERGMAN: Without the tip credit, Condi says a $15 wage would be devastating since so many restaurants already struggle to survive.

CONDI: I think it will fundamentally change the business model for many restaurants, particularly table service restaurants.

The story goes on to state that patrons of restaurants in Los Angeles can now expect tipping to be eliminated, and much higher menu prices and services charges to be implemented instead. And even that may not be enough to preserve the thin profit margins of restaurants. Expect there to be a host of job losses in the restaurant industry, and for a number of restaurants to go out of business–all so that people can feel good about having passed a minimum wage bill that the city’s economy plainly cannot afford.