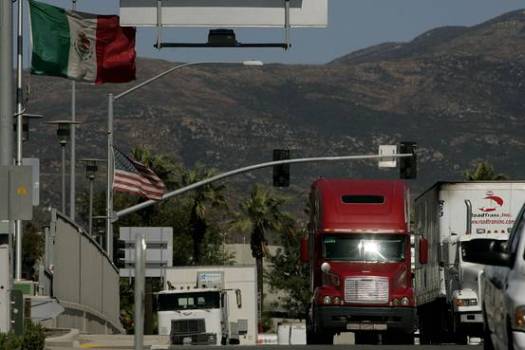 From a policy perspective, there doesn’t seem to be much going on that is good these days, so I suppose that when we actually do find good news, we ought to highlight it. That is what I am trying to do in this post about free trade.

First off, let it be noted that the issue of trade liberalization is actually uniting Republicans and the Obama administration in Washington:

“It’s been almost an out of body experience but we’ve been working closely with the White House,” McConnell told reporters Tuesday as he said the trade bill would follow action on two other measures. “We’re working together to try to get it across the finish line.”

The Obama administration is seeking to build a coalition of mostly Republicans and a few Democrats to back the trade bill, which lets the president send agreements in Congress for a quick vote without amendments.

Obama says the ability will help him complete the Trans-Pacific Partnership, a top second-term goal.

In the House, the bill faces opposition from most Democrats and some Republicans. House Speaker John Boehner, an Ohio Republican, has said Obama will need to persuade Democrats to back him, something McConnell said is happening.

“At the risk of having some of you literally faint, I want to compliment the president for the way he’s handling the trade issue,” McConnell said.

And let there be no doubt that opposing the Trans-Pacific Partnership Act constitutes a stand in favor of economic ignorance:

If Congress were to take an exam in Economics 101, would it pass? We are about to find out.

The issue at hand is whether Congress will give President Obama “fast track” authority to negotiate a trade deal with our trading partners in the Pacific. The bill is favored by some congressional leaders of both parties, including Senator Orrin G. Hatch, the Republican chairman of the Finance Committee, Senator Ron Wyden, the committee’s ranking Democrat, and Representative Paul D. Ryan, the Republican chairman of the House Ways and Means Committee.

House and Senate committees approved versions of the legislation last week. But with influential lawmakers like Senator Elizabeth Warren, a Democrat, opposed to the measure, final congressional approval is far from certain.

Among economists, the issue is a no-brainer. Last month, I signed an open letter to John Boehner, Mitch McConnell, Nancy Pelosi and Harry Reid. I was joined by 13 other economists who have led the President’s Council of Economic Advisers, a post I held from 2003 to 2005. The group spanned every administration from Gerald Ford’s to Barack Obama’s.

We wrote, “International trade is fundamentally good for the U.S. economy, beneficial to American families over time, and consonant with our domestic priorities. That is why we support the renewal of Trade Promotion Authority (TPA) to make it possible for the United States to reach international agreements with our economic partners in Asia through the Trans-Pacific Partnership (TPP) and in Europe through the Trans-Atlantic Trade and Investment Partnership (TTIP).”

Economists are famous for disagreeing with one another, and indeed, seminars in economics departments are known for their vociferous debate. But economists reach near unanimity on some topics, including international trade.

So essentially, there is the same overwhelming consensus among economists that free trade is a good thing as there is among climate scientists that there is global warming going on. Duly noted. Maybe congressional Democrats–who like to cite the latter consensus when working to set climate policy–ought to take note.

The good news is that the American public has wised up when it comes to the issue of trade:

Americans’ views of free trade have  improved from the low levels following the recession, according to a new Wall Street Journal/NBC poll, suggesting a more favorable climate for a push by President Barack Obama and Republicans to pass new trade legislation.

Americans were divided over the North American Free Trade Agreement (Nafta), whose legacy haunts the current debate over whether to pass legislation expediting approval of the 12-nation Trans-Pacific Partnership. Some 29% of respondents said that the 1994 trade agreement had more of a positive impact than a negative impact, compared with 26% who said that Nafta had more of a negative impact. The Trans-Pacific Partnership would cover almost 40% of the world economy and represent the largest trade deal for the U.S. since Nafta.

The results still reflect a big shift from the last time the question was asked in September 2003, when only 18% of respondents said that the agreement was more positive than negative. At the time, almost twice as many respondents – some 35% — said that Nafta had a more negative than positive impact.

I suppose that it is worth noting at this point that protectionism can actually be deadly:

The United Nations has urged Nepal to relax customs controls which it says are holding up deliveries of aid to survivors of last week’s earthquake.

Many people are yet to receive the aid, which is piling up at Kathmandu airport, a week after the 7.8-magnitude earthquake on 25 April.

More than 7,000 have died. Authorities have ruled out finding more survivors.

The putative next president of the United States is waffling when it comes to whether or not she supports the Trans-Pacific Partnership Act (quelle surprise). Fortunately, a significantly more responsible presidential candidate is calling her to account:

Back in 2012, while she was serving as Secretary of State, Hillary Clinton called an emerging economic partnership with 11 Pacific Nations the “Gold Standard in trade agreements.” She said it did everything a trade agreement should do — promote free markets, provide a level playing field and protect the rule of law.

She said we need to “keep upping our game both bilaterally and with partners across the region through agreements like the Trans-Pacific Partnership.”

Last week, less than four days after she announced her bid for the presidency, she cooled her enthusiasm considerably. Sec. Clinton’s campaign said trade agreements have to pass fresh tests and even greater scrutiny — and among the issues she raised were elements like currency manipulation that the Obama Administration have said were “poison pills” that would kill the negotiation. So much for the gold standard.

These new reservations are conveniently timed. Sec. Clinton wavered on support for trade the last time she ran for President as well.

It seems Secretary Clinton thinks we have a short memory.

I have no problem supporting TPP.

We’ve worked with some of our most important allies in negotiations to help make this possible — and asked them to take political risks of their own to open their markets to American goods, agricultural products, and services. It sends a terrible signal this late in the negotiations for Sec. Clinton to pull the rug out from under our allies for a short-term political gain.

As governor of Florida, I led 15 trade missions to numerous countries across the globe, including Mexico, Israel, Spain, the United Kingdom, Canada, Colombia and Germany. I know what it means to create strong agreements to help attract investment, jobs, goods and services. I saw the impact firsthand as Florida became a mecca for trade to and from Latin America and Europe. Florida benefited from these agreements.

It ought to go without saying that a responsible press corps would be taking Hillary Clinton to task for her politically convenient about-face on the issue of trade, and praising Jeb Bush for having the courage of his convictions. We’ll see if that happens sometime before a meteor strike kills all life on Earth. In the meantime, it is good to see that free-traders are fighting back against the antediluvian forces of protectionism. The nation’s economy–and that of other nations involved in the Trans-Pacific Partnership Act–can only benefit from the further liberalization of trade.

One Reply to “Remember: Free Trade Is a Good Thing”