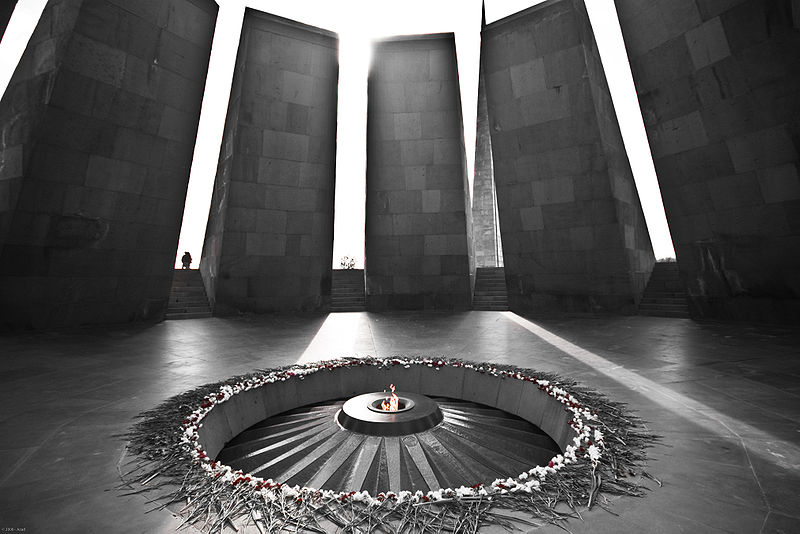 Comes now the part of the year when attention turns to the ethnic cleansing of 1.5 million Armenians at the hands of Turkey in the aftermath of the fall of the Ottoman Empire. Back in 2008, candidate Barack Obama pledged that he would call these massacres what they were–genocide.

White House officials have decided that President Obama will not use the word “genocide” to describe the killings of more than 1 million Armenians at the hands of Ottoman Turks when he commemorates the deaths Friday, the 100th anniversary of the massacres.

The decision, revealed Tuesday in a meeting with Armenian American groups, backs down from a previous Obama pledge.

“As president I will recognize the Armenian Genocide,” Obama said while running for president in 2008.

His decision not to do so now sparked anger from activists.

“The president’s surrender represents a national disgrace,” said Aram S. Hamparian, executive director of the Washington-based Armenian National Committee of America. “It is a betrayal of the truth, and it is a betrayal of trust.”

White House officials defended the decision as necessary to preserve the chance of cooperation with Turkey, a NATO ally, on Middle Eastern conflicts.

The Turkish Embassy, which has spent millions lobbying Congress on the issue, did not respond to a request for comment. the Turkish government has said that the mass killings do not meet the legal definition of genocide and that it would be a mistake for the U.S. to use the term. Some members of Congress have also warned that a shift in official U.S. references could hurt American foreign policy.

The story goes on to note that the Obama administration is refusing to call the massacres “genocide”–a term historians happen to think is an accurate one–because it is hoping for Turkish cooperation in resolving the civil war in Syria. Of course, hope is not a plan, and it is worth remembering that Turkey has been a lousy American ally as of late, so one wonders why the Turkish government is being coddled at all over this issue. Incidentally, if one is hoping for at least a little Turkish sensitivity regarding the genocide of the Armenians, one is bound to be disappointed:

Ankara is not participating in any of the memorials, nor does it appear ready to meet Armenian demands for an apology. Instead, on the same day of the genocide anniversary, the Turkish authorities scheduled a centennial commemoration of the Battle of Gallipoli, an event that helped lay the foundation of modern Turkish identity.

The anniversary comes after several years in which the Turkish government seemed to be softening its position. With the flourishing of new civic society organizations, the government became more tolerant of views of history that differed from the official one. Last year, President Recep Tayyip Erdogan, in offering condolences to the Armenians, went further than any Turkish leader ever had in acknowledging the painful history.

Yet as the anniversary has drawn near, the situation has fallen back into well-established patterns: Turkish denial, Armenian anger and little sign of reconciliation. Mr. Erdogan has turned combative, embracing the traditional narrative.

“The Armenian diaspora is trying to instill hatred against Turkey through a worldwide campaign on genocide claims ahead of the centennial anniversary of 1915,” Mr. Erdogan said recently. “If we examine what our nation had to go through over the past 100 to 150 years, we would find far more suffering than what the Armenians went through.”

This is appalling rhetoric, but it is par for the course when it comes to Ankara’s position regarding the genocide of the Armenian people.

It is reassuring that at least Pope Francis is willing to call what the Armenians went through “genocide.” It would be nice if the government of the United States had the same moral courage–and the same attention to historical detail–that the Holy See possesses, but apparently, we are meant to be disappointed on this issue. Relatedly. note that “the Turkish embassy” has “spent millions lobbying Congress” regarding this issue. Are John Mearsheimer and/or Stephen Walt going to spend so much as a nanosecond yelling and screaming about the pernicious influence of the Turkish lobby on the design and implementation of American foreign policy? Doubtful.