After reading this, do you feel safer or more secure? Do you think that American national security interests are served when the besotted use the awesome power of the state to spy on those with whom they are in love?

The practice isn’t frequent — one official estimated a handful of cases in the last decade — but it’s common enough to garner its own spycraft label: LOVEINT.

In the wake of revelations last week that NSA had violated privacy rules on nearly 3,000 occasions in a one-year period, NSA Chief Compliance Officer John DeLong emphasized in a conference call with reporters last week that those errors were unintentional. He did say that there have been “a couple” of willful violations in the past decade. He said he didn’t have the exact figures at the moment.

After you have picked your jaw up from off the floor, read this as well. I don’t know which part of the story is worse; the fact that a Hindu traveler was mistaken for a Muslim? The fact that a TSA officer demonstrated that he knows nothing whatsoever about Hinduism and that what he thinks he knows is laughably wrong? The fact that no traveler–Hindu, Muslim, Jew, Christian–ought to be subjected to such a mix of both insulting behavior and inept security procedures? The examples of petty tyranny that make up so much of the piece? The craven actions of JetBlue? The fact that in all of its years of existence, the TSA appears to have learned precisely nothing from past mistakes?

Oh, and while we are on the subject, this Venn diagram still is accurate: 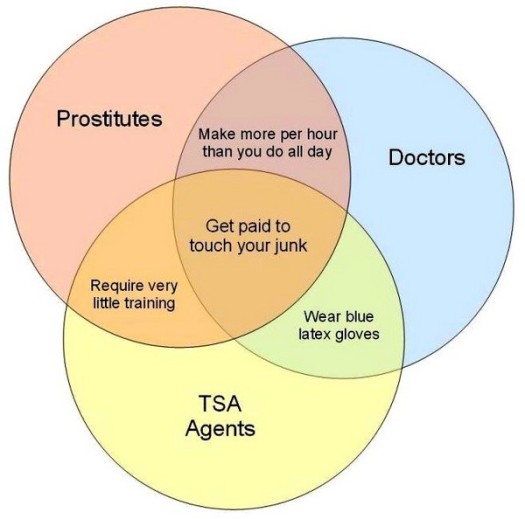 I swear, some politician could strike electoral gold if s/he ran a campaign made up in large part of efforts to making the TSA go the way of the dodo bird.